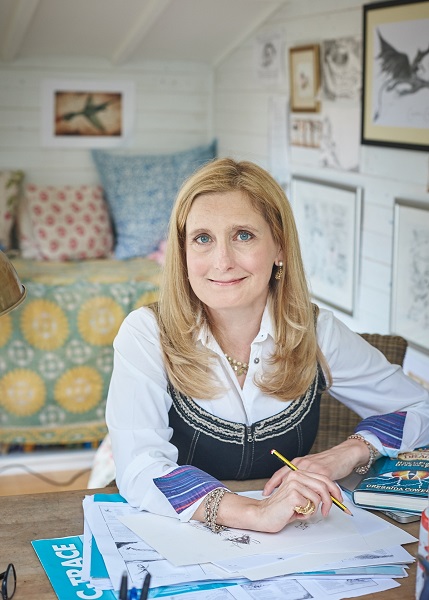 Cressida Cowell answers your most frequently asked questions, all in one place!

Are any of the characters in the Hiccup books like YOU?

I identify with Hiccup a lot, because I think he is in a really difficult situation, trying to live up to a parent, (Stoick), who is very different from him. However, Hiccup is a diffident person who doesn’t put himself forward as Mr Important, but in fact he is full of clever ideas and very calm in a crisis. (He would actually make a great Leader of the Tribe one day if those stupid Hooligans would only recognize how lucky they were to have him as the Heir.)

I, on the other hand, am a bit of a show-off and in a crisis situation I tend to panic and run around in circles.

How do you manage to make up the names for the dragons?

Well, I do like to have names that are a TINY bit silly sometimes because I do like books that make me laugh. But the reason they’re not EXTREMELY silly is that, as you can see in my guide to dragons, Incomplete Book of Dragons, there is a whole world that does need to seem real to readers. So there are Tree Dragons, Cutie dragons, Sky Dragons, and so on, and then different types within that.

What inspired How to Train Your Dragon?

The ‘How to Train Your Dragon’ books were inspired by the summers I spent as a child on a tiny, uninhabited island off the west coast of Scotland. The island had no roads, houses or electricity, and I used to imagine that there were dragons living in the caves in the cliffs. By the time I was eight, my family had built a small stone house on the island and from then on, every year we spent four weeks of the summer and two weeks of the spring on the island. The house was lit by candle-light, and there was no telephone or television, so I spent a lot of time drawing and writing stories. In the evening, my father told us tales of the Vikings who invaded this island Archipelago twelve hundred years before, of the quarrelsome Tribes who fought and tricked each other, and of the legends of dragons who were supposed to live in the caves in the cliffs. Vikings believed in dragons. They thought they were magic because they could exist in all four elements: air, fire, water and earth.

How does it feel seeing your creations come to life on the big screen?

I cannot tell you how exciting it is to see your creations come alive on the big screen. How to Train Your Dragon 3 is an absolutely magnificent ending to the film trilogy, and I am so very proud of all three movies. This is particularly important to me because this is a very personal story – Stoick was based on my own father, and the island of Berk is a real place where I spent a lot of time as a child – so it is deeply satisfying that the tale is told in the movie with such heart and emotion, as well as with such beautiful animation. Flying on the back of a dragon was my childhood dream, and watching these movies you really feel you are doing that. The Toothless in the books will always have a special place in my heart, but I love the movie Toothless too, he’s adorable. Everything in the films is true to the spirit of the books, all the messages about how we need to look after the environment, and the wild creatures and places in this beautiful world we live in. And the kind of leaders that we need, kind, clever, imaginative leaders like Hiccup, who have creative ideas.

How involved were you in the process of making the third movie?

I am very close indeed to the people who make the movies. It is pretty much the same people over at DreamWorks who have made  all three movies, same producer, director, animation team, actors, and artists designing the characters and the world, and the same composer creating the music, and they have been the most wonderful team. I have always been consulted, sent scripts and my opinion sought, but I have also tried to stand back, and say, ‘I am a book writer, and you are the film-makers.’ Sometimes this can be hard to do, but I think that this freedom can allow others to do their best work.

Do you miss Hiccup and the gang?

Yes, I do miss Hiccup and the gang. I have written twelve How to Train Your Dragon books and Hiccup and the gang have become like real people to me, over the years. I still feel myself thinking sometimes: ‘What would Hiccup do in this situation?’ But endings are just the beginning to a new and glorious adventure. I started my new book series, The Wizards of Once, thinking ‘I’ll never be able to fall in love with the characters and the world as much as I did with How to Train Your Dragon’…but now, three years on I am just as in love with Wish and Xar and Bodkin as much as I was with Hiccup and the gang! I love Xar’s naughtiness…I love Wish’s creativity and empathy and hopefulness…Xar and Wish are Wizards who can do Magic, and MAGIC is as exciting as flying on the back of a dragon, but in a different way.

What advice would you give kids who would like to become writers?

My top writing tip would be to read lots, to give you a feel for the way different stories can be told. Also practice writing as much as you can – write, and re-write – don’t worry if you don’t finish a story, as long as you are practising, that’s what matters.

How long does it take you to write a book?

About a year including illustrations!

How old were you when you realised you wanted to be a writer?

I was about eight or nine. When I was a child my handwriting was terrible, my spelling was incomprehensible but I loved writing stories… Aged nine I entered a writing competition which, to my amazement, crowned me the winner! It gave me the confidence to think, ‘I could be a writer one day’.

Were you encouraged to start writing by anyone in particular when you were young?

Yes, I had two teachers who were very encouraging. In year 3, Miss Mellows gave me loads and loads of blank exercise books and she let me write stories in them, even in maths lessons. Miss Macdonald was my history teacher when I was 12, and she set wonderful homeworks, such as ‘Write a story about a child living in a village on the west coast of Scotland, who sees a Viking sail on the horizon…’

Where do you write?

I am lucky enough to have a studio at the end of my garden. It only takes 10 seconds to walk there, but I find it very important to make a break between work and home. I’ve put up lots of pictures up on the wall – some my own drafts of illustrations, some of the amazing artwork that children have sent to me (mostly of dragons). My studio has a desk at one side with a skylight above so that I get daylight for illustrating. On the other side is a comfy bench with cushions on that I can sit and read on if I get to a tricky bit.

What would your school reports have said about you?

They said that I day-dreamed a lot and that I was very disorganised. I was called ‘Messy Cressy’. Here is an extract from one of my school reports, written by one of my teachers when I was 16: ‘To follow up one of Mr. Byrom’s points, there was at least one examination for which she had very little idea of the exact time until shortly before the examination was due to begin.’

What was the inspiration for The Wizards of Once?

My Wizards of Once books are inspired by holidays spent playing in the chalk and the woods of the Sussex South Downs, where my grandparents lived. These are old, old landscapes that have been inhabited by human beings and their stories for so long, that you feel you would not be terribly surprised to meet a Roman legionary striding across the hillside. It does trouble me somewhat that children have so much less unsupervised access to the countryside, and what that might mean for their future creativity and for their relationship and understanding of the natural world.  One of the major themes and inspiration for the Wizards of Once, is the importance of children interacting with nature in a ‘wild’ way, and of looking after and preserving the natural world around us. This is more vital than ever, as we face the threat of global warming, and the slow destruction of wild habitats around the world.

As a kid, I also wanted to be magic. Children are surrounded by adults who are VERY BOSSY. They might not always mean to be bossy, and they have the best of intentions, but still, they are definitely bossy. I think one of the reasons kids want to be magic is to get back some of the control…

I put a lot of myself into the character of Wish, who is a determined, creative, imaginative person. Wish is an artist. Her loneliness makes her subconsciously bring the spoon to life. This is what writers do all the time.

I do have a few Xar-like characteristics as well, however. I’m optimistic and I can be in a hurry, acting before I think. However the characters take on a life of their own once you start writing them.

In the first WIZARDS OF ONCE book, two sworn enemies have to work together.  Why did you want to write about this/ where did the idea come from?

I wanted to encourage empathy in my readers. Research shows that books are fantastic at awakening empathy in children – which we see all the time with brilliant books like RJ Palacio’s Wonder. In THE WIZARDS OF ONCE we have two children who have to see things from another point of view in order to defeat a common evil. Empathy is what we need in these present times and it’s something that children are quite good at! One of my favourite quotes is from To Kill A Mockingbird, “You never really understand a person until you consider things from his point of view…until you climb in his skin and walk around in it.” 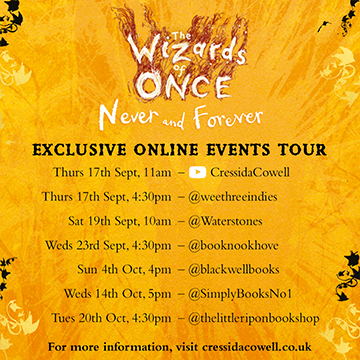 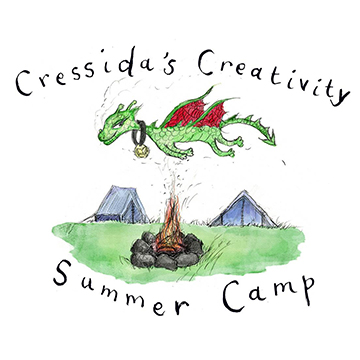 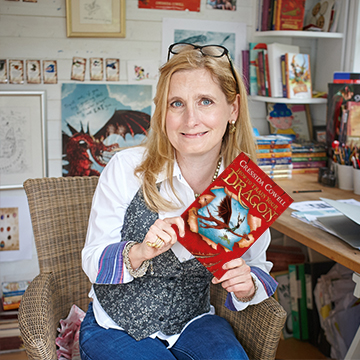 Cressida launches BookTrust Home Time and reads How to Train Your Dragon aloud! 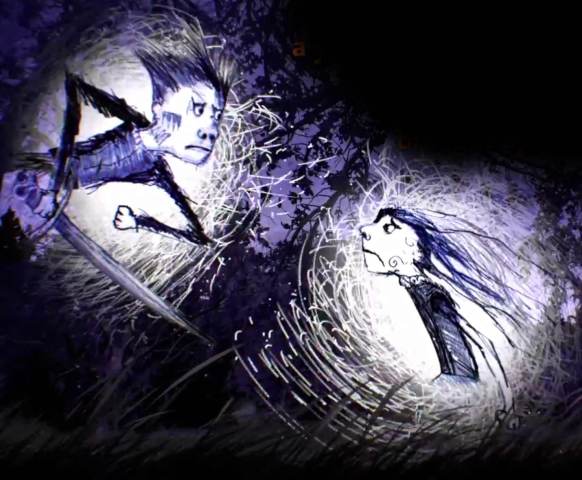 Once there was magic – Teaser Video! 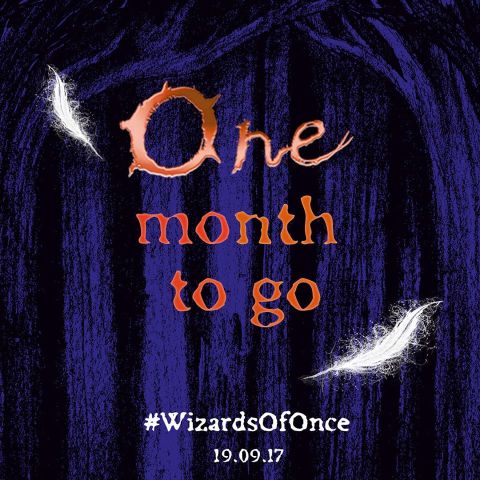 Pre-Order Wizards of Once!